The Abbey Ridge Observatory (ARO), built in 2003, is the world's second fully-automatic Twitter-controlled observatory located in Stillwater Lake, NS, Canada and is owned by Dave Lane.

Here are links to other groups and observatories:

The RASC Halifax Youtube Channel provides access to numerous educational video resources and records of some of our activities.

The Facebook group Astrophotography Nova Scotia has numerous contributions from local astronomers and photographers as does the group Queens Country Astronomy Group.

Do you have a screw loose?

The Halifax Planetarium has a long history, dating from its establishment in 1955 at the old Nova Scotia Museum of Science on Spring Garden Road; ; it one of the oldest public planetariums in Canada. The Halifax Planetarium is now located in Dalhousie University's Sir James Dunn Science Building. See map. For information on the availability of public shows, please visit here.

For information about shows for groups (school, community, etc.) write to:

The Minas Astronomy Group (MAG) is an informal group of amateur astronomers who meet in Avonport, NS on the 2nd Saturday of each month (unless a holiday weekend).

The New Brunswick Centre meets on the 2nd or 3rd Saturday of the month in Moncton, St. John or Fredericton.

Astronomers Without Borders (AWB) brings the world together to share their passion of astronomy and the wonders of the Universe. AWB is dedicated to fostering understanding and goodwill across national and cultural boundaries by creating relationships through the universal appeal of astronomy.

SCO 360º panorama data sets for use with Stellarium or KStars 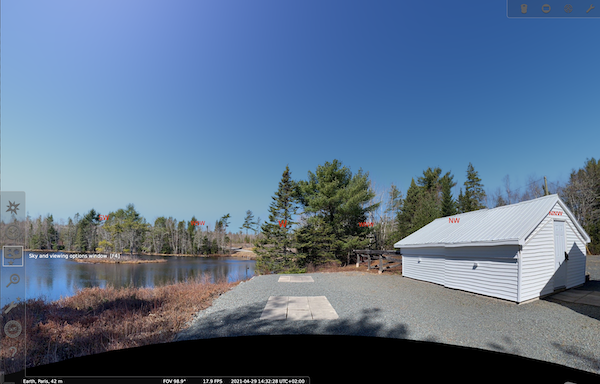 In Stellarium, select the sky viewing options and choose “landscape” and “add/remove landscape” to select the zip file containing the folder to be added.

In KStars, using the EKOS options to enable and define the reference “terrain” image location.